When it comes to the real stars of ‘Odysseo,’ a horse is so much more than a horse.

They live better than you and I. That’s the word on the 65 horses that star in the touring show “Odysseo” by Cavalia, playing in Irvine through Jan. 8.

They eat five square meals a day, each meted out with nutritional precision by three veterinary technicians according to individual dietary needs. They get loved by professional riders, aerialists and acrobats described by show creator Normand Latourelle as “cuckoo for horses,” folks who “cannot live without smelling horses at least once a day.” These equine stars travel with their own ID cards for crossing borders, and they exercise in the great outdoors. They even have their own retirement home in Canada.

No, they are not playing bingo and sauntering around in equestrian walkers. They are simply hanging out in big green fields in Quebec, the province where Cavalia is headquartered. Latourelle, who was among the pioneers of Cirque du Soleil, dreamed up Cavalia in 2003. “Odysseo,” which was launched in 2011, is basically Calvalia 2.0. It has been described as “Cirque du Soleil with horses,” but Latourelle prefers to call it “the one-and-only 6D show in the world.”

He’s talking about scope, size and stage depth. The 17,500-square-foot stage features a hill that rises three stories tall beneath a 125-foot, white big-top tent sprawled like a massive melting marshmallow between the 5 and 405 freeways. Ten thousand tons of rock and sand are trucked in to create a platform for the action. At the conclusion of the show, the stage is flooded into a lake with 40,000 gallons of recycled water.

With that massive stage and its traveling big top, “Odysseo” claims to be the world’s largest touring production in sheer size. It takes 120 semi trucks to move the show from city to city â far more than a Rolling Stones world tour. And audiences have responded to the spectacle. The show, which is basically a fantasy journey around the world featuring horses and acrobats in flashy costumes, grosses between $40 million and $50 million a year, Latourelle says.

When “Odysseo” was in Irvine last spring, more than 90,000 spectators showed up during the course of the run, making it Orange County’s best-selling show of all time, representatives say. Coming back for the holidays was a no-brainer.

Staging the show is pricey. Latourelle estimates an annual cost of nearly $40 million for a tour of five cities. Food alone for the 200 people travelling with the show costs about $750,000 for an eight-week run in each city. Cavalia keeps a kitchen tent onsite that serves gourmet fare including, on a recent Monday, octopus pistachio salad and pork roast with rum apple bacon sauce.

In their parallel universe, the horses’ meals are equally upmarket. Some eat timothy hay with its delicate bluish hue and 10% protein content. Others are treated to flat, leafy orchard grass that is high in fiber and heaven on the digestive tract. Electrolytes are on the menu, as are dense, chewy alfalfa cubes that are low in sugar and high in calories for horses that need to put on some extra beauty weight. 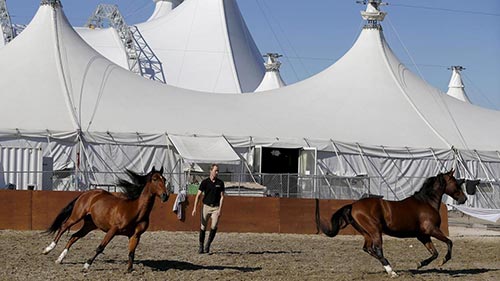 Latourelle is exercising his dietary preferences by eating a simple sandwich of tomatoes and cheese on whole wheat bread. He says he loves horses but he’s not wild for them. Nor has he ever ridden. He was inspired to incorporate the noble animals into his show after watching a performance featuring horses and realizing that when a horse is onstage, the beast steals the show no matter what.

“You have to be very humble to be an artist here,” he says later while watching a rehearsal in the big top. Riders are jumping horses over long wooden posts in a magical-looking forest.

“When the horses come in, you don’t see the people anymore,” he says. “You just saw a horse jumping but you wouldn’t recognize that guy.”

I do recognize that guy, though. His name is Steven Paulson. He’s tall and blond with a bit of a faux hawk, and he’s an artist and trainer who specializes in leading the horses in something called Liberty. I watched him work with two horses, Kilo and Kart, earlier in the day while rider and aerialist Rebecca Ratte described the meaning behind his subtle movements.

Liberty means freedom, and it essentially involves letting the horses run loose while at the same time encouraging them to move in tandem.

Kart and Kilo are BFFs. They’ve been in the show together for almost eight years, during which time they have been housed in neighboring stables and worked as a team in acts. On this particular day, Kart is clearly feeling a bit lazy. He’s already been allowed to run around for a bit so he’s just lolling around now. Kilo, however, is totally feeling his oats and running all over the place.

Paulson is trying to get them to “vibe with their emotions.” Paulson and Ratte are definitely the kind of people whom Latourelle described as cuckoo for horses. They may not necessarily need to smell horses every day to be happy, but they do talk about them like people. It turns out their success working with horses has a lot to do with the horses’ mental space.

“Horses are their own entities, and they have their own language,” says Ratte, a former competition rider and trainer who says that never in a million years did she think she would end up in this kind of show. “If they don’t do something we ask them to do, it’s probably because we’re not asking them correctly. We have not done our job to explain it to them in a way that they understand.”
Horses, it turns out, respond to energy, touch and pressure and release.

“You give a little pat and feel them take a breath,” says Paulson. “Doing less is actually more.”

Ratte adds, “You teach them how to take energy and then be calm within it.”

This may sound New Age-y, but it’s not. Watching Paulson work you can see the horses react. He gently touches an elbow and they kneel. Punishing a horse is verboten.

Instead, the horses get luxurious baths every day. Many get their manes braided â a process that can take up to 45 minutes per horse but leaves them looking like long-faced versions of Daenerys Targaryen from “Game of Thrones.” They get lots of stretching and conditioning work, and they are fitted with custom saddles polished to a high shine. For them, carrots are like ice cream, and they consume 1,750 pounds of tasty orange root vegetables every year. 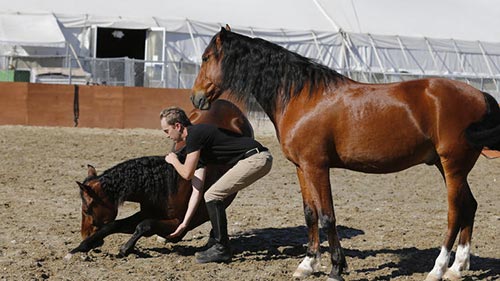 Horses and humans have a lot in common. Latourelle says that if you treat a horse well, it will give you 10 times more than you ask of it. If you don’t, it’ll be stubborn and possibly dangerous. Horses crave positive attention. They also love music.

At “Odysseo,” the horses have their own band. It’s not a band of horses, it’s a band perched in two air-conditioned nests on either side of the stage, playing music for the show. Serge Gamache, a guitarist who joined the show after a stint playing gypsy jazz in Costa Rica, says that playing for the horses requires improvisation since you can’t rely on the horses to always do the same thing each night.

“It’s very interesting to play for horses,” he says, tapping his long Flamenco nails on his pant leg. “When the music goes from mellow to upbeat, you can see them perking up.”
Before each show, Gamache has a certain routine.

“It’s kind of a ritual. I go into the stable and bond with the horses,” he says.

The horses also have routines before they go onstage to perform for crowds of up to 2,000. Bud, a Quarter Horse whom Ratte calls “a really good guy,” likes to fall asleep backstage with his nose in Ratte’s lap.

But when it’s show time, the horses know just how to shine.

“Onstage is their playground; it’s almost like a reward,” says Paulson. “It’s just this big open pen, so it’s their happy place.”