Run time: 2 hours and 30 minutes, with one intermission

Eat your heart out, George Balanchine. While that fabled choreographer may have worked with two-legged thoroughbreds throughout his life, the creative team behind Montreal-based Cavaliaâs wildly poetic, grandly beautiful new show, âOdysseoâ â now galloping beneath the Big White Top perched adjacent to Soldier Field â has a stellar corps de ballet full of four-legged dancers. And these impossibly graceful creatures are sublimely melded into a fluid, awe-inspiring spectacle that makes the many forms of motion â animal and human and mechanical â of the essence. A fleet of 65 magnificent horses join a vast cast of equestrian masters and mistresses, spectacular aerialists, exceptional musicians and a troupe of acrobats from West Guinea who easily could wipe out the competition for the gold medal in gymnastics floor exercises at the Olympics.

The fantasia of movement and derring-do that is âOdysseoâ casts a transfixing spell â a mixture of nail-biting exhilaration and calm finessed by a massive creative team led by directors Normand Latourelle and Wayne Fowkes, choreographers Darren Charles and Alain Gauthier, composer Michel Cusson and a slew of designers who make the Earth move and the wind palpable.

For all the motion here (and âOdysseoâ does take its title from an epic voyage), and for all its seamless blending of disparate global landscapes and talents, it is a moment of rest that might just be the most exquisite image in this $30 million show. It comes immediately after the intermission as the lights come up on a rolling landscape where dozens of horses can be found sleeping on their sides, while the bodies of their riders are wrapped peacefully around their massive flanks. The sense of trust and affection in the scene is stunning to behold, and rendered with a magnificent painterly eye. 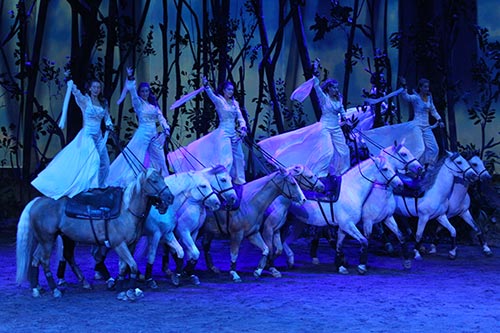 For pure subtlety of motion, and the altogether astonishing form of communication that can be established between horse and trainer (sometimes involving a six-year process), there is Elise Verdoncqâs mastery of nine impossibly beautiful white Arabian horses. With the gentlest of signals (just call her âthe horse whispererâ), she has them circling, interweaving and forming countless groupings in a scene titled âFreedomâ that easily could rank with moments from the classical ballet âSwan Lake.â

And talk about poetry in motion: At one point in the show a massive carousel is lowered into the ring, with acrobats performing astonishing aerial pas de deux on the poles that are affixed to the sculpted horses while the memory of real horses circling the stage lingers. Just as breathtakingly lovely is a complex piece with silks motored by white horses, and a sensual duet on an airborne hoop that is a remarkable combination of grace and strength.

Of course it is not all pure lyricism here. For sheer rowdiness there are the âCossack Ridingâ scenes in which daredevil tricksters circle over, under and around their steeds as they gallop at top speed across the stage. There also are âThe Fairies,â six women riders, their long white silk skirts flying behind them as they gallop â standing tall in the saddle â with their legs astride two horses. (Throughout, the costumes by Georges Levesque and Michele Hamel work wonders.) And there are a wide variety of formations that find the horses moving over many and varied topographical environments â from plains, to desert, to canyon, to lake bed.

Adding immense charm and comic playfulness throughout âOdysseoâ are the nine Guinean acrobats and musicians. The rapidfire, almost gyroscopic back flips of a couple of these performers are alone worth the price of admission. And their drumming and singing animates every scene they appear in, especially when they involve the audience in a bit of call and response on a song that translates into âNo more war on Earth!â

Other acrobats (called âstiltersâ), are outfitted with springy running blades that enable them to compete with the horses in a pole-jumping routine. For the traditionalists in the audience there also is a lovely sequence of stately dressage in which the horses might as well be in pointe shoes. 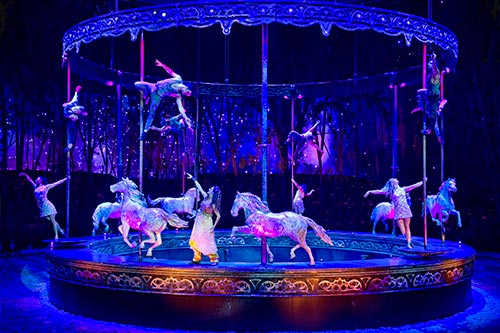 Performing Michael Cussonâs mesmerizing score is vocalist Valentina Spreca, who weaves in and out of the action on stage, with superb musicians perched in booths on either side of the tent theater.

The magic of âOdysseoâsâ scenic design (the work of Guillaume Lord and the multimedia company Geodezik) is worthy of a review all its own, with one stunning landscape after another moving into view thanks to a state-of-the-art video screen (the backdrop for countless visual tricks) and the creation of a three-story mountain over which the horses appear in a moment of great dramatic impact.

The synchrony of every element of this show is so meticulously timed and realized that you really have to save a special little part of your heart for the one horse that seemed to have a mind of his own and briefly tried to go his own way. On the other hand, you might very well find yourself wondering if his little rebellion, too, might have been âchoreographed.â Magic.